As some of you will know a little while before the end of Term 2, Bumble and I made the difficult (but definitely the right) decision to remove Buzzbee from his primary school and begin home educating him.

When we deregistered Buzz, I believed I had a moderate understanding of where the gaps were in his learning ability and needs, and I’d like to think I still do.

At some point I will write a post focusing on what these needs are and how his early years experience and lack of understanding by school, has had a dramatic and profound effect on his ability to learn.

Having said this, I am not above taking any opportunity that I can, to use learning activities as ways of helping bridge the self-esteem and emotional gaps.

This week’s #WASO theme is ‘The work of my child/children’ and ties in very nicely with the end of the first part of Buzz’s latest topic – Ferocious Volcanoes and Dinosaurs.  With Buzzbee, I very quickly learnt that it was pointless me trying to get him to sit down to a desk with workbooks and follow the national curriculum guidelines – admittedly at first I was as stubborn as him and we endured several very stressful and unsuccessful mornings locked in a battle of wills.

Buzzbee prefers to be very hands on and visual – maths and science are by far his favourite subjects and his is relatively confident in his own skills in these 2 areas.  Currently his biggest barrier is his reading, which then impacts on everything else, but we have found ways around this.  Buzzbee’s handwriting is actually quite good and his ability to remember and translate factual information is far superior to mine (he is a little sponge), but he lacks the confidence to write his ideas down independently and he tells me what information he wants to add to his project, I write it down for him and then he will sit down and copy it out (although he will try his best to write as little as possible). For now this works for him and allows him to be in a position where he can succeed and feel good about his work. 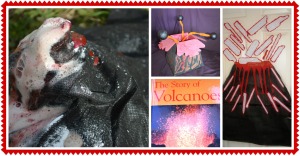 Where self-control for Buzzbee is difficult, at times he can demonstrate an incredible level of self-awareness and on several occasions while discussing/researching volcanoes, he has identified similarities between his reactive responses and the warning signs that a volcano is about to ‘blow’.  Cue mummy moving into reflective dialogue mode: “I’m wondering if there is anything that maybe the little volcano or others around him could do to help him calm down the hot bubbling lava before it starts exploding and spilling out over the sides and burning something or someone?”  Rather than using his usual distraction/shooting down techniques – an outpouring of ideas came flooding out from Buzzbee. Most were, understandably, unachievable, some were absolutely hysterical (put him in a Yoga position, open his mouth and pour in slush puppies until steam comes of his ear or he gets brain freeze), but then there were a couple of gems which, with support, he could use (jumping jacks or squeeze a teddy bear)  – he is a star, and I only wish he could believe that himself.

Buzzbee has several challenges to overcome when it comes to his learning, and there are days when I wonder if I am the right person to help him with this, or if we should have pushed harder while he was at school to get him the assessments he needs so we can understand whether his barriers are down to his anxiety and fear of failure or if (as I suspect) there are other contributing factors holding him back (be that sensory or cognitive), but for now Buzzbee and I will keep trying to do the best we can and we will wait to see what the future holds.

8 thoughts on “Project: The Little Volcano”