Buzzbee (and Beeswax, really) are getting very accustomed to the fact that most weekends I try to put aside a small amount of ‘mum’ time to attempt to write some kind of post and Buzz has begun to ask on a Friday what the latest The Adoption Social #WASO theme is to be.

Beeswax is mainly indifferent to the posts but is very aware that I write them and sometimes his curiosity does get the better of him – this week being one of those times and his response left me wondering whether I wanted to playfully throttle him or hug and kiss him, because whichever way I look at it, a huge step had been made by him.

So what am I talking about? Well, quite simply. He asked about the #WASO theme, I told him that it was ‘Poetry’ and with the tone and expression only a teenager can pull off, his response was “Please tell me you aren’t going to write about the blasted ‘cake man’s’ poem!”

Once I had stopped laughing and regained my composure, I am afraid I became a little playful with him and pretended that I didn’t understand what poem he was talking about – in all honesty this was possibly the first time no-one has had to prompt him about something that is important to me and my heart was bursting with joy.

Irritated he responded with “You know what I am talking about! The one written by the man who wrote ‘Jungle book’. The Mr Kipling guy”, “You are always going on about that silly ‘IF’ poem your teacher made you all learn by heart.”

OK maybe I have used the poem a little more than I have realised but it has such special memories for me of a truly wonderful man who went above and beyond his role as a teacher to make each of his pupils feel that they mattered and were important to all around them – personally for me, not only did he support and encourage me throughout my days at school but, for years to come after, he was still there pushing me that little bit further – we would write regularly and it broke my heart when he died only days before I had arranged to visit him with Bumble to surprise him with the news of our engagement.

However, before my conversation with Waxy, I had intended on writing a completely different post. One which, while there would have been reference to ‘poetry and verse’, the post I planned to write was about Buzzbee and his SPECtacular (apologise for the pun) new perspective on learning. It hadn’t occurred to me that I may be writing about positive steps forward for both boys.

OK, so when it comes to Buzzbee’s big news. What am I talking about? Recently I tweeted.

When Buzzbee was told by the optician that he would need glasses for close up work and that he would like him to have another test that may help understand a little more about how he sees words on the page, his immediate response was “So I am not thick or stupid, I just have problems with my eyes”. Forget almost bringing me to tears with his reply, I couldn’t help but notice that the big burly optician had begun to well up also. Buzz was so excited by the news, he broadcasted it at full volume to everyone waiting including Beeswax and then did his ‘happy dance’ (the optician commented that he is the only child he has ever met that has done a ‘happy dance’ because he NEEDS glasses – obviously he has forgotten the mammoth meltdown he had the last time he had an eye appointment because he DIDN’T need glasses).

It was agreed after the first appointment that it was their opinion that he was finding difficulty focusing on words in some situations and was showing significant signs of having Scotopic Sensitivities and would in their opinion benefit from colour tinting being added to his glasses (we have tried the sheets in the past and he couldn’t tolerate the fussiness of them). Fast forward a few weeks and after 3 separate Colorimetry testing appointments, and several silent ‘mummy teary moments’ while they found the correct colour for him – the kind of moments when you hear your child’s voice, who has been struggling for so long with learning, go from a monotone “ok, ok, a bit better” to “That is SO much better, I can see the words perfectly” (Oh bugger, here I go again!).

This week we have collected his glasses and WOW what a difference there is in my little boy – now I am not saying this will fix his anxiety around reading (in fact the optician’s advice was to push for the Ed Psych to reconsider her decision not to assess him).

OK going to stop gushing and tie this post back to the #WASO theme. Despite Buzzbee finding reading very stressful, he does love books and will ‘interpret’ them in his own way and is extremely good at memorising books that have been read to him. He is particularly fond of stories that have a rhythm and their verses rhyme – Julia Donaldson and her stories are a particular favourite with Buzz. One of his favourite books that he likes Bumble to read to him is ‘Zog’ by Julia Donaldson (Bumble loves dragons so usually there is no arguments from him when the request comes from Buzzbee).

At the beginning of this weekend Buzzbee requested that I read it to him before bedtime and, while I knew I may well be pushing my luck, I suggested he tried wearing his glasses and reading to me instead. After a fleeting moment of panic and a reassurance that I wasn’t expecting him to read the whole book to me, he agreed to ‘give it a go’ and once again the room was filled with the wonderful sound of his excited voice when he commented that ‘the words look so much cooler. I am not stupid anymore, I am learning to read’ (I am not daft enough not to have realised that possibly a majority of the words he read at that point were already memorised verses, but the boost that his new glasses are giving to his self-esteem fills me with confidence that he will one day be really reading all the words himself and with moderate ease).

For the first time in a long time, not only am I confident that Buzz will catch up with his peers after missing out on so much while his then school claimed he was ‘unteachable’, but Buzz is beginning to believe in himself also.

I will leave this post with Buzzbee’s favourite line in his book “he zigzagged through the blue”, which is incidentally, if you hadn’t already guessed, the colour of his new glasses also. 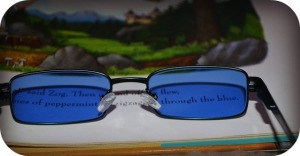 2 thoughts on “Making a ‘Spectacle’ (of myself)”