I have managed to find myself in a position where I can write a complete post and upload it in time for this weeks’ #WASO link up – Okay maybe I should make a confession. The only reason I have a little time to myself is because I have had a toddler style tantrum over the fact the males in the hive seem to struggle lately with the basic concept of picking up after themselves, let alone helping out with minor household chores without spending double the length of time doing it because they are so busy attempting to annoy me so much that I take over the task myself (which I will admit is what usually happens in the end), however much to their dismay, their regular tactic backfired on them and mummy declared that she was going on strike and the 3 of them would have to fend for themselves.

Definitely not very therapeutic but miraculously the jobs were suddenly completed with little or no fuss and an hour later Bumble drew the shortest straw and carefully peeked around our bedroom door to waving the white flag.

I have been longing for just ‘5 minutes to myself’, so having a whole hour to myself was pure luxury (well it would if I hadn’t been so worked up about the males in the house).

The last few weeks in all honesty have been more than a little difficult and relationships with Waxy and school have been pushed to our absolute limit and Bumble and I are finding ourselves raising concerns and exploring painful questions about our family’s future if the current situation doesn’t change and support from Post Adoption and ASF is not forthcoming very soon, and as a result I have struggled to find opportunities to indulge in any form of self-care for myself and in the rare moments when I have found some space and time, something has managed to derail it.

Okay that is not entirely true. Last September as a birthday present, Bumble gave me a gift voucher for a whole day 1:1 photography lesson with a local photography studio in a picturesque National Trust village. Recently I have finally managed to make use of the voucher spent an entire day focusing on something that I enjoy and being able to switch off from being mum for a few hours safe in the knowledge that the boys were safe at school/forest school and Bumble has organised his work day around their timetable.

I had for the first time in I do not know how long, spent a complete day without any ties to ‘planet adoption’ and it felt wonderful. For one day I wasn’t someone’s mum or wife and the only person I needed to focus on was myself (oh and the wonderful lady who was providing my 1:1 lesson).

I surprised myself during the lesson by realising how much I already seemed to know about getting the best out of my DSLR camera and I lost count of how many times I sat listening to the tutor explain this, that and the other and my mind drifted off thinking about random photos I have taken with my camera over the time, while listening to a little voice in my head saying “oh so that is what happened, I didn’t even realise I could do that”.   Apparently each time I did this, the tiniest of a ‘shy’ smile kept catching the tutor’s eye.   At the time I passed it off as being amused at being “jammy so and so” and blindly blundering into lucky shots but in truth, the reason was so much deeper and more personal – I am not sure I can really explain it very well without coming across as wet or self-absorbed but I supposed after the rejection I experience day in and day out with my boys and the negativity that is projected at me from every direction over the years, my self-confidence and self-esteem has been all but destroyed and I now struggle to ‘sit with’ or believe positivity or praise that is directed my way (see I told you it would sound wet) but on the day for some reason my guard was down and my confidence was receiving a much needed boost (even if it was just for a few hours).

While the morning was focused on theory and a little bit of practical practise in the studio with my camera making exciting discoveries about the true extent of what it can really do and how some of the functions in it can do a WHOLE lot more than I could ever have dreamt it could.

I don’t mind admitting I let out a little squealing of excitement to discover that a button which I had believe was only a zoom feature for viewing photos already taken, can in fact be used to take incredibly clever photos (I am still working on perfecting the skill of creating a decent photo using it for now).

The afternoon was spent strolling around the village and visiting the Abbey putting what I had learnt during the morning into practise and discovering that my amazing telephoto lens which only ever comes out when I am taking photos of the boys at the beach or when we are visiting the safari parks, can in fact produces absolutely stunning close up photos that even I would be mistaken for believing were taken with a macro lens.

During the day I managed to get a few lucky shots, some that I didn’t quite achieve the composition that I had hoped for, and some…. Well let’s not talk about these ones and then we have the photographs that are still haunting me days after they were taken of a sweet elderly couple who I was mesmerised with as they walked through the cloisters together. I couldn’t help wondering about their story. Who were they? How had they met? How long had they been together? What had brought them to the abbey that day? – Okay I know I am a nosey devil but there was something about these two that was pulling at my heart strings and evoking bittersweet memories of my dear depart grandparents and the love and unconditional devotion they had for each other for nearly 60 years. In all fairness when they would come for a visit they did insist on taking an afternoon drive over to this village for a cream tea and a stroll around the abbey, so I supposed the place already holds special memories for me and the sight of this couple reignited them for me. (I really hope they won’t mind me including them in this post)

Listen to me jabbering on! What I have neglected to say is…… while the course was wonderful and I got so much out of it physically and emotionally. It wouldn’t have mattered if I didn’t manage to take one single usable photograph because the biggest realisation of the day was not the fact that I can actually take some nice photographs. 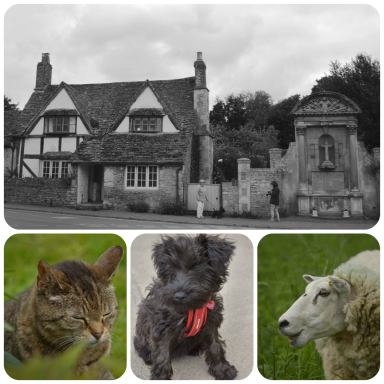 Residents of the village including the most adorable puppy

It was the realisation that all this time, the answer to my self-care prayers has been under my nose all the time.   I have something that I can and already do uses as an excuse if I need 5 minutes to myself.

I can lose myself in my photograph and refill my tank before it reaches empty. We live in a beautifully areas, adorned with rolling hills, woods, rivers and meadows so while If I am lucky my four-legged and 2 legged muses will oblige and not run for the hills at the sight of the camera (okay maybe not Buzzbee, he only needs to spot the camera in my hand and he is posing away), I still have plenty of opportunities to find an excuse to escape the trauma and destruction that often fills my days living on ‘planet adoption’, for a few short guilt free minutes or hours.

The greatest WordPress.com site in all the land!

three beautiful girls - two of them are mine

An adoption blog by two mums and a big brother to adopted little sis - the good, the bad and the plain ugly